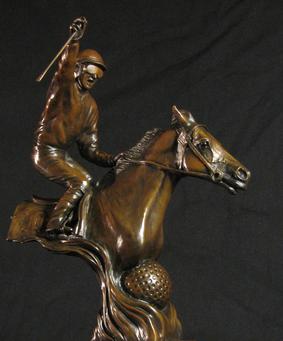 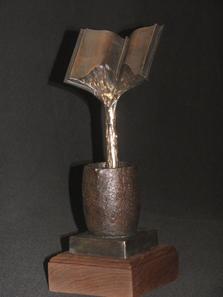 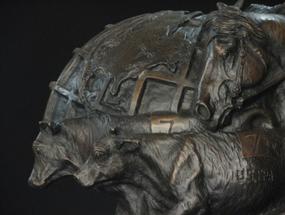 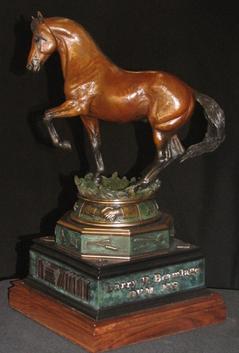 Here are a few examples of awards and trophies we have developed for various clubs, companies and non profit organizations. Give us your Idea or a concept and we can develop a custom designed sculpture for your presentation ceremonies and events. 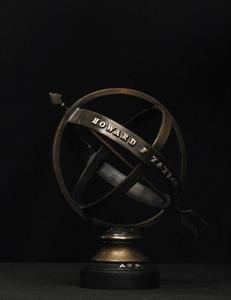 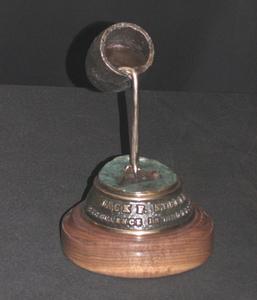 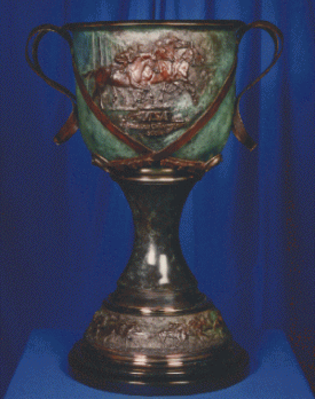 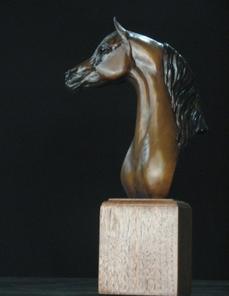 In 2010 Jonathan was honored to create USTPA's first World Championship Trophy. This bronze is sculpted in high relief and is mounted on a black walnut base. 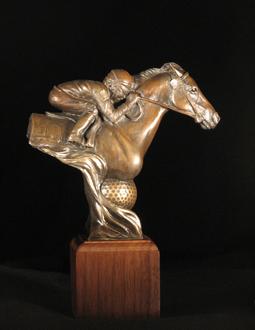 Daniel Island golf club needed a trophy to present to the tournament winners of their spring event . This golf course is built on land which was the former home of  famed 1953 Kentucky Derby winner Dark Star. We incorporated the race horse and jockey with a golf ball and turf motif that morphs into a organic flame like image accentuating the movement and speed of this beautiful animal.

In 1997, Moeller was commissioned by American Association of Equine Practitioners (AAEP) to create a prestigious award for Frank J. Milne lectureship, sponsored by Pfizer Pharmaceuticals, at their annual convention. The AAEP is an association of veterinarians which crosses all disciplines, breeds and associations within the horse Industry.

The resulting "Frank J Milne State of the Art Lecture" award stands over 18" tall, and consists of a generic, all breed statue of a horse atop a multi-tiered base, with the first two bronze tiers symbolically depicting the educational, technical, and research aspects of the veterinarian trade. The third tier, representing the mission of the AAEP, depicts hands clasped under a refining, fire, as the members come together in fellowship to distill and and refine knowledge and ideas synergistically for the betterment of horse healthcare throughout the world. The featured lecturer at the convention receives the sculptured award with his name added to the base in cast, raised letters.

In 1995, VISA USA decided to become the title sponsor for thoroughbred horse racing's Triple Crown Challenge (Kentucky Derby, Preakness Stakes and Belmont Stakes). In 1996, VISA teamed up with Triple Crown Productions and the Thoroughbred Racing Association to create the 3-Year-Old Championship Series, consisting of 46 races (including the Triple Crown events), staged at 21 racetracks in 11 states. Points are awarded to the top three finishers of each race, with the grade of each race determining the number of points. The top scorer wins the Series.

VISA awarded Moeller a commission to create a one-of-a-kind perpetual trophy for the Series on the basis of his artistic skills as well as his ability to the immense project within two months. The result was a three-foot tall, 200 pound artistic trophy to be on permanent display in the National Racing Museum and Hall of Fame. The trophy consist of several bronze parts atop a plinth of black granite native to South Dakota. The bowl of the cup contains relief scenes of horses breaking out of the starting gates on one side, and striving towards the finish line on the other. The stem has a marble -like patina, with a band at the bottom which houses small plaques with the names of the Series winners. A relief of a continual racing scene encircles the base. An actual racing bridle was used to sculpt reins and snaffle bits which entwine the bowl and arc out to form the handles of the cup. Several different patinas were used to provide accents and coloring to the bronze.​