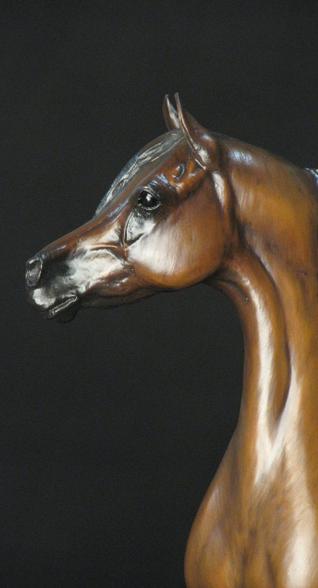 Jonathan Moeller has professionally produced  bronze sculpture for over three decades, specializing in equine and other animal subjects. Having raised and worked with horses since his childhood, Moeller developed an intuitive understanding of their nature, enabling him to produce sculptures which are true to the form and spirit of the horse. Not only an artist, but also a master craftsman in foundry work, Moeller personally ushers his work through every step of the process from clay model to hand- finished bronze sculpture, using the "cirque purdue", or ceramic shell investment method. His work includes no only sculptures, bur also functional pieces, such as sculptured lamp and vases with an equine theme. His freelance sculpture work has attracted commissions for trophies and awards from the highest echelons of the equine world, including Visa 3-Year-Old Championship Series Inaugural trophy, which permanently resides in the National Racing Museum and Hall of Fame in Saratoga Springs, N.Y.

Born in 1957, Moeller was raised on a dairy farm in South Dakota, where he was  able to nurture his love of horses and wildlife. Fascinated in particular with horses from a young age, Moeller paid for his first purebred Arabian with money earned as a teenager. Working with, caring for, and training horses, Moeller naturally developed an eye for every nuance of their physique and a feel for every quirk of their nature.

Inevitably influenced by his dad's work in watercolor and drawing, Moeller abandoned agriculture studies in favor of an art degree at South Dakota State University. Having seen and admired bronze equine sculptures, Moeller decided to pursue that particular medium of art. After receiving his degree in 1981, he continued his education with post graduate studies at Northern State University in Aberdeen, SD and Radford University, Radford, VA, to develop and perfect his foundry skills, enabling him to build and operate his own foundry business. Those skills, coupled with his well-honed artistic ability, allow Moeller to work independently to produce finished bronze sculptures of the finest quality, and to finesse his schedule to meet sometime- tight deadlines for commission work.